Do we need to re-learn how to talk to each other? 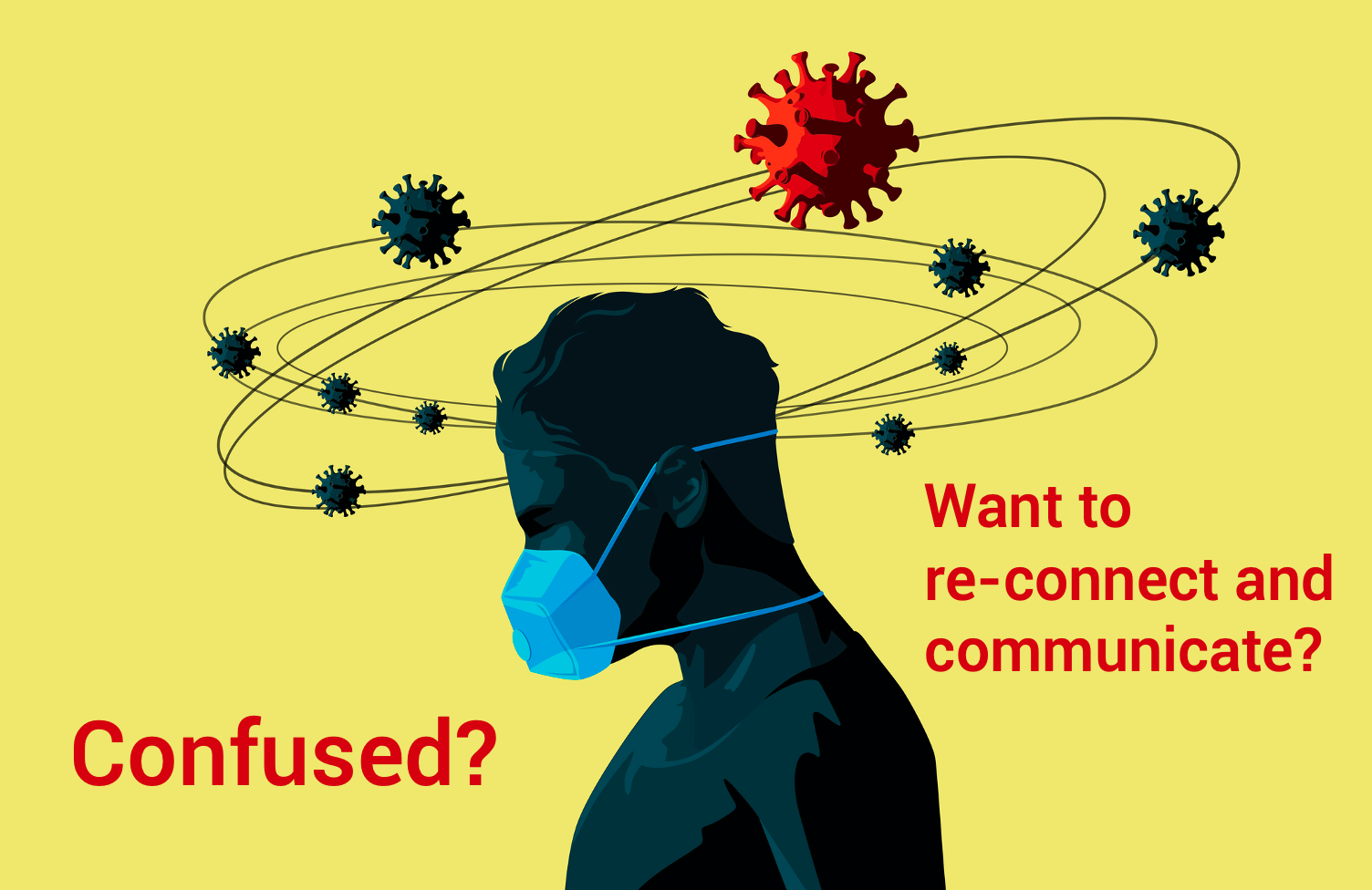 Suffering cognitive dissonance or spending too much time trying to unpick logical fallacies?
Having difficulty speaking with your friends or family about touchy subjects such as how best to manage your health while a virus named SARS-CoV-2 is meant to be one of our greatest health concerns?
Concerned that creeping totalitarianism poses a greater threat to you and your loved ones than any virus?

If any of this rings true – we urge you to please read on.

Now to some words from Kamran Abbasi, executive editor of the BMJ, one of the most influential medical journals in the world…

“Murder is an emotive word. In law, it requires premeditation. Death must be deemed to be unlawful. How could “murder” apply to failures of a pandemic response?….. If policy failures lead to recurrent and mistimed lockdowns, who is responsible for the resulting non-covid excess deaths? When politicians wilfully neglect scientific advice, international and historical experience, and their own alarming statistics and modelling because to act goes against their political strategy or ideology, is that lawful? Is inaction, action? At the very least, covid-19 might be classified as “social murder,” as recently explained by two professors of criminology.”

Next, to the words of Prof Dr Matthias Desmet, from the Faculty of Psychology and Educational Sciences, Ghent University, Belgium….

“The unimaginable became reality: we witnessed the abrupt pivot of nearly every country on earth to follow China’s example and place huge populations of people under de facto house arrest, a situation for which the term “lockdown” was coined. An eerie silence descended—ominous and liberating at the same time. The sky without airplanes, traffic arteries without vehicles; dust settling on the standstill of billions of people’s individual pursuits and desires. In India, the air became so pure that, for the first time in thirty years, in some places the Himalayas became once more visible against the horizon. 2

It didn’t stop there. We also saw a remarkable transfer of power. Expert virologists were called upon as Orwell’s pigs—the smartest animals on the farm—to replace the unreliable politicians. They would run the animal farm with accurate (“scientific”) information. But these experts soon turned out to have quite a few common, human flaws. In their statistics and graphs they made mistakes that even “ordinary” people would not easily make. It went so far that, at one point, they counted all deaths as corona deaths, including people who had died of, say, heart attacks.

Nor did they live up to their promises. These experts pledged that the Gates to Freedom would re-open after two doses of the vaccine, but then they contrived the need for a third.  Like Orwell’s pigs, they changed the rules overnight. First, the animals had to comply with the measures because the number of sick people could not exceed the capacity of the health care system (flatten the curve). But one day, everyone woke up to discover writing on the walls stating that the measures were being extended because the virus had to be eradicated (crush the curve). Eventually, the rules changed so often that only the pigs seemed to know them. And even the pigs weren’t so sure.

Some people began to nurture suspicions. How is it possible that these experts make mistakes that even laymen wouldn’t make? Aren’t they scientists, the kind of people who took us to the moon and gave us the internet? They can’t be that stupid, can they? What is their endgame? Their recommendations take us further down the road in the same direction: with each new step, we lose more of our freedoms, until we reach a final destination where human beings are reduced to QR codes in a large technocratic medical experiment.

“COVID-19 is a fraud because its alleged causal agent, a purported novel coronavirus called SARS-CoV-2, has not been proven to exist in nature and therefore has not been established as the cause of COVID-19, the disease and pandemic invented by the World Health Organisation (WHO). For the selfsame reason there are no variants of the “virus”, which likewise exist only hypothetically in computers, cloud-based gene banks and in the minds of innocent people who have been comprehensively gulled by their governments.”
[Source]

Those who are aware of the profound and deleterious changes that have been enacted on human societies, in the name of protecting them from a single virus named SARS-CoV-2, have often found themselves united. For many, it’s been “us” vs “them”. Or, as the widely acclaimed Hungarian/American psychologist Ervin Staub, one of the leading researchers on genocide, calls it, the “ingroup’ vs the “outgroup.”

But now we’re seeing divisions within our seemingly once-united “outgroup”.

For this reason – and because the polarisation that’s occurred between ingroups and outgroups has split relationships, families and society – we need to re-learn how to communicate with other. To prevent further disintegration in society that makes so many even more vulnerable to being manipulated by the state – or the elites.

That’s why are calling you to join us in a unique, educational and experiential workshop that you can participate in, either in person (Guildford, Surrey, UK) or online (from anywhere in the world).

Discover the 10 reasons why you should join us online or in person at our unique, ground-breaking event, Behaviour and Communication Magic, on September 24, 2022.

Book your online or in-person ticket (spaces for the latter in Guildford, UK, are limited) now – and join internationally acclaimed behaviour and communications expert David Charalambous – along with ANH’s Meleni Aldridge and Rob Verkerk PhD –  to re-learn how we should behave and communicate with those who see the world differently. 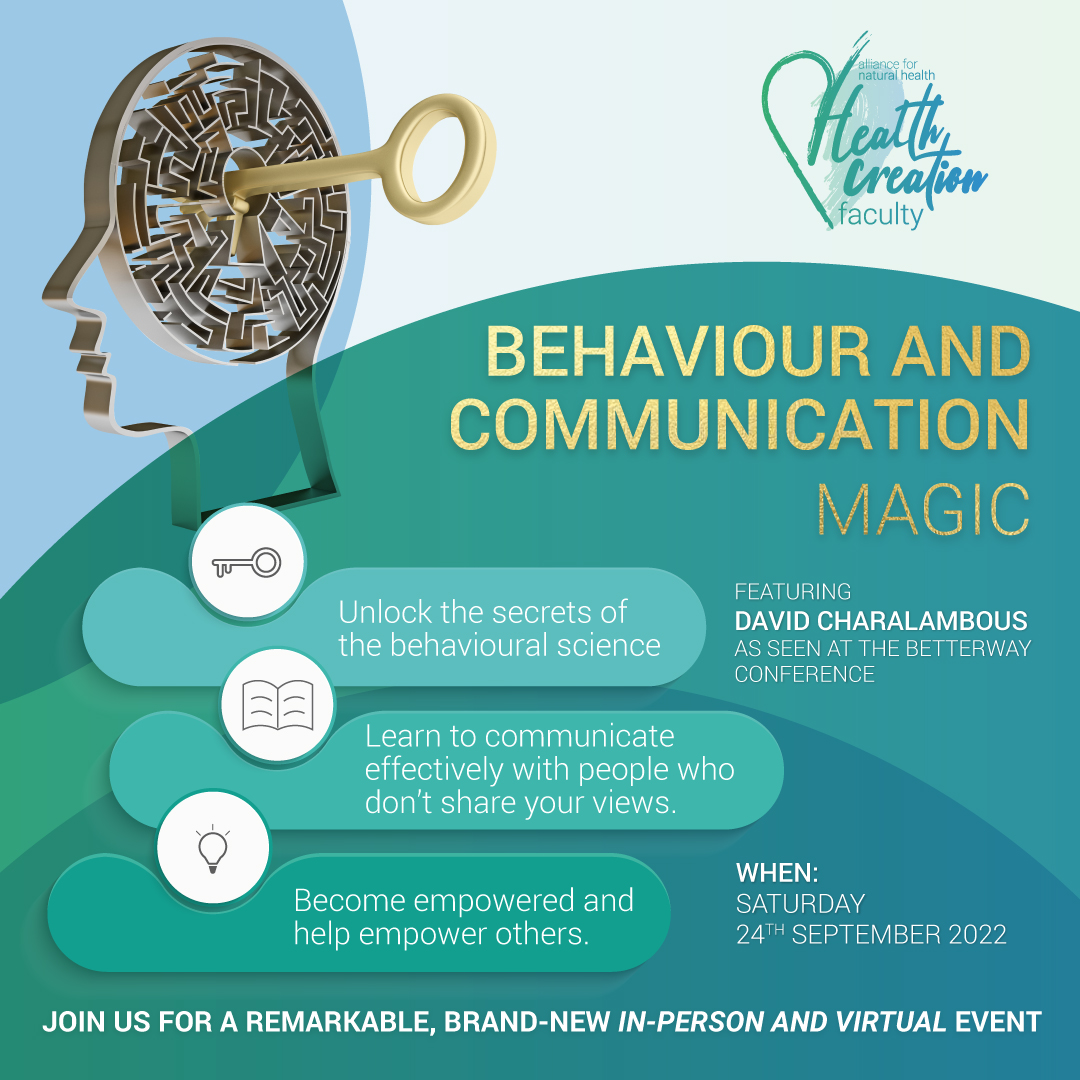 >>> Ready to break free from the current narrative? Want to understand more about how people are being coerced and manipulated? Or are you a health professional who would like more tools for your practitioner toolkit? Find out more about our upcoming training day, Behaviour and Communication Magic

>>> If you’re not already signed up for our weekly newsletter, sign up for free now using the SUBSCRIBE button at the top of our website – or better still – become a Pathfinder member and enjoy benefits unique to our members.


>>> Return to the homepage