Date:23 November 2022 Content Sections ● Is there any evidence of a direct link between C19 genetic vaccines and skin cancer? ● Beyond peer review journals ● Is it all just coincidence? ● Why medics underreport cancer cases ● How can we better understand what’s going on? ● The curved ball of causation ● Let’s look at the bigger picture ● The jury is out By Rob Verkerk PhDFounder, executive and scientific director, ANH-IntlAdvisory Board member, Yes to Life, UK integrative cancer charity   Professor emeritus Michel Goldman MD PhD is one of Europe’s leading doctors and immunologists. He’s the founder and the President of the I³h Institute and Professor of Immunology and Pharmacotherapy at the Université Libre de Bruxelles (ULB). He’s spent a lifetime developing new drugs and has been a long-running champion of vaccines, most recently mRNA vaccines used to combat covid-19 (C19). When he wrote a piece for Science Business in February 2021 pushing for more C19 vaccines in Europe, he wouldn’t have known his own life might be compromised by the very products he was so passionately advocating. Five months after receiving his second of two doses of the Pfizer C19 mRNA ‘genetic vaccine’, Prof Goldman felt unwell with flu-like symptoms and swollen lymph nodes. His brother, Serge Goldman, head of the nuclear medicine department at ULB, ran a CT scan of him. That led to the diagnosis of a specific type of lymphoma, AngioImmunoblastic T cell Lymphoma (AITL). Dr Goldman knew his immune system was going to take a hammering from chemotherapy, so he decided to get his third, ‘booster,’ jab, in the hope it might give him some protection against C19 disease should he contract the virus while undergoing treatment. But another scan just 8 days later showed the cancer had gone into overdrive – appearing like fireworks throughout much of his body on the PET/CT scan (Figure 1, right side image). 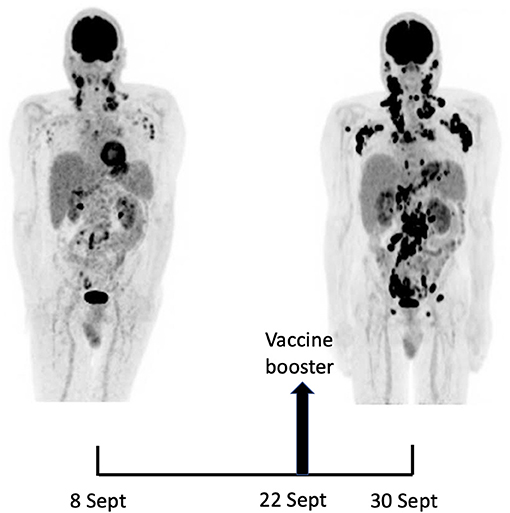 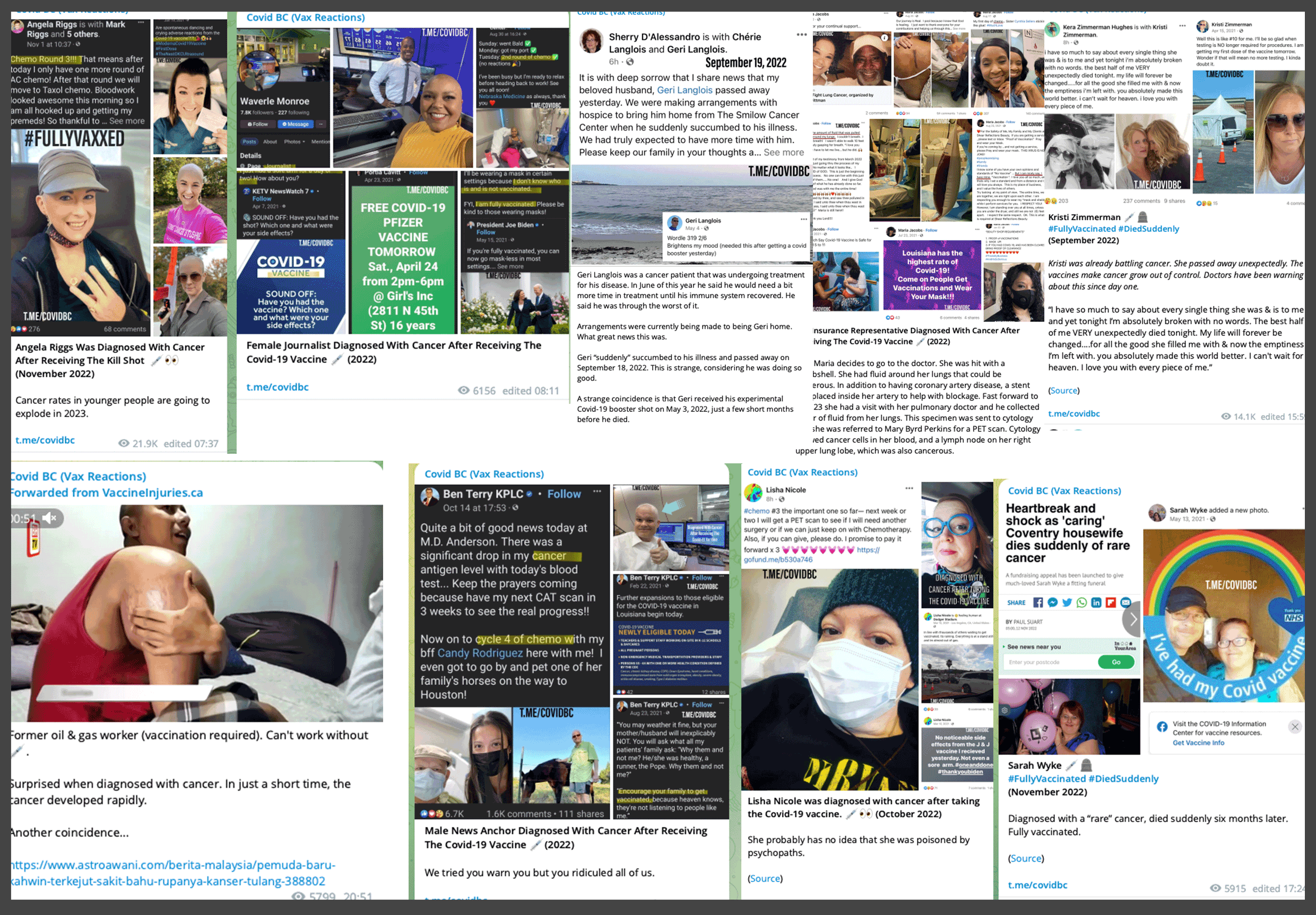 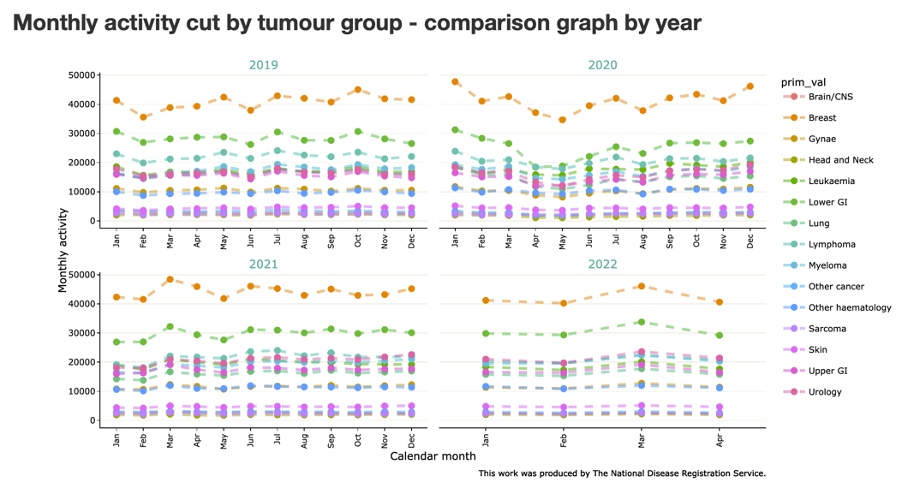 Figure 1. UK National Health Service (NHS) Systemic Anti-Cancer Therapy COVID-19 Dashboard summaries. Note drop in cancer treatments between March-June 2020 linked to the first pandemic wave. Following this, there is an uptick in treatments over many types of cancer, that can best be seen by clicking through successive months in the drop-down menus of the comparison tables (2019 vs 2020, 2021 vs. 2019/2020, 2022 vs. 2020/2021) of the ‘Monthly Activity + sub-population breakdown’ tab. Some cancers and months really stand out, such as those affecting the urological system (~140% uptick in prevalence), but there is no easy way of clearly separating out backlog ‘catch-up’ effects from a potential additional signal from the C19 vaccines. As cancer specialist Prof Karol Sikora says in his UnHerd’s Post from last Monday, “the lockdown cancer wave has only just begun”. News is out suggesting Europe will be facing a “cancer epidemic” because 1 million cases were missed owing to reduced access to healthcare during the pandemic. Is this another cloud that will be used to disguise any potential contribution by C19 vaccines? Given we can’t access any crystalline data on the subject, what clues in the data might we be looking for if such a C19 vaccine/cancer signal was present? One expectation might be that the numbers that were elevated from backlogs should start to orientate back towards normality (pre-pandemic levels, as per 2019). For many types of cancer they don’t do this – but you can’t see this from any of the summary tables for the first 4 available months of 2022 as NHS Digital has seen fit to not provide summary tables that let you compare 2022 with 2019. Turning to the Scottish data – there are some interesting insights. Is, for example, the consistently raised prevalence of prostate cancer (Fig. 2) only down to backlogs, given there is no apparent trend towards 2019, pre-pandemic levels?

Figure 2. Official data from Public Health Scotland COVID-19 wider impacts on the health care system dashboard The jury is out Yes, although the jury may be out in terms of being able to point to unequivocal data showing a relationship, the facts suggest not commissioning an independent jury to investigate this complex and confounded issue would be socially irresponsible (what’s new?). We could sit back and trust the authorities and even the mainstream journals that have published papers saying ‘no need to worry about the jabs and cancer’ (such as here and here). But these have been wrong on many prior occasions. For an ever growing number of us, any trust of the establishment in such matters, unfortunately, dissipated long ago. There are more than adequate data to suggest both a motive (profit) and a potential mechanism (widespread evidence of immune system dysregulation). We would be doing our fellow humans a disservice if we ignored the possibility of a smoking gun. This task being made all the harder given the cloud created by ‘pandemic backlogs’ that you should expect to hear a lot about. It wouldn’t be the first corporate cover-up, but it may be the biggest. We will continue to track the data and share more as it becomes available. >>> Feel free to republish – just follow our Alliance for Natural Health International Re-publishing Guidelines >>> If you’re not already signed up for our weekly newsletter, sign up for free now using the SUBSCRIBE button at the top of our website – or better still – become a Pathfinder member and enjoy benefits unique to our members.     >>> Return to the homepage