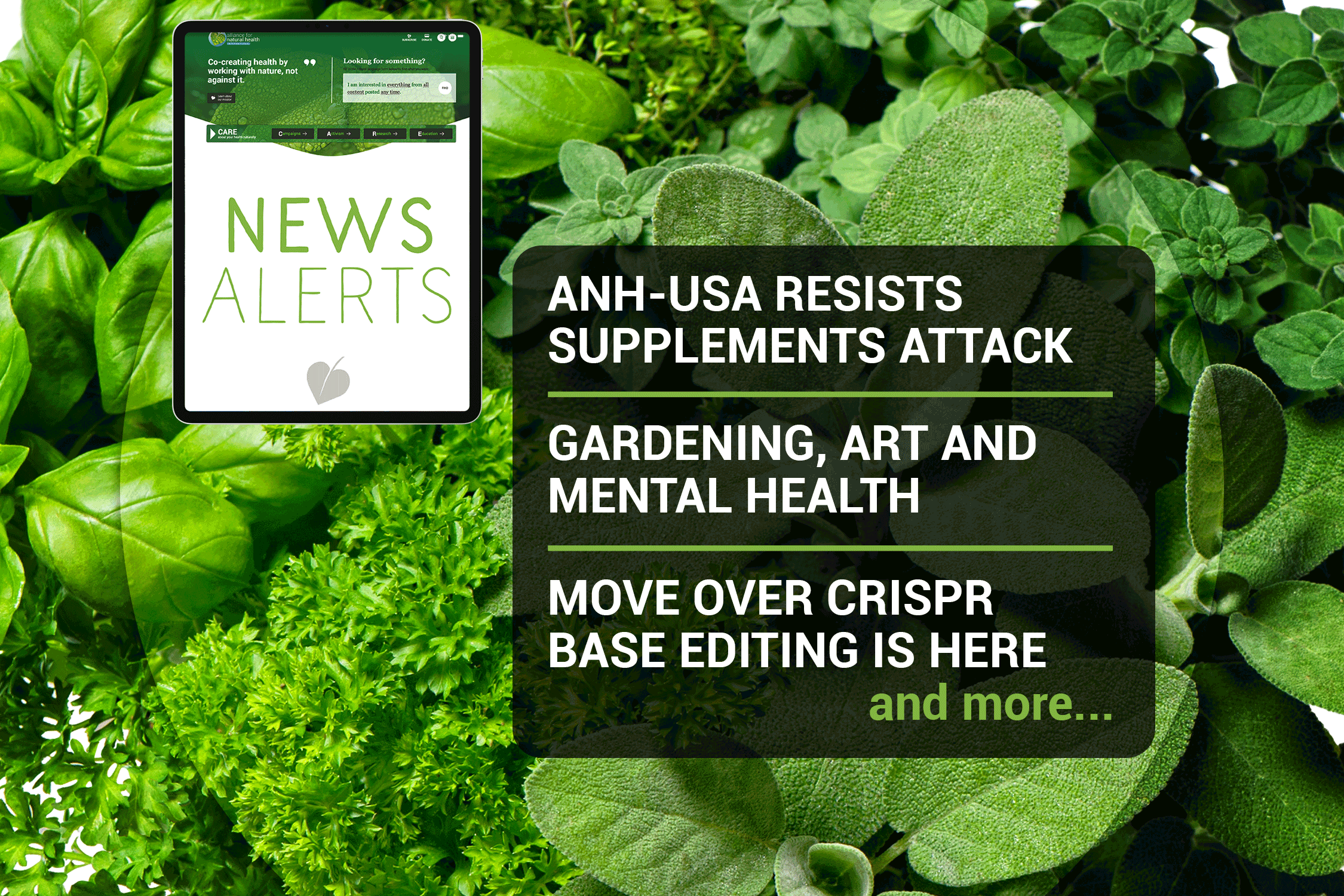 ANH-USA resists attack on US supplements

The team at our sister organisation, ANH-USA, are continuing to resist the attack on dietary supplements by pharma schills in the US. In a recent video, executive and legal director of ANH-USA, Gretchen DeBeau, and Alexis Baden-Mayer, political director for the Organic Consumers Association (OCA) discussed Big Pharma’s efforts to eliminate supplements, which pose one of the biggest threats to the continued reliance on its products and sales pipeline. There are encouraging signs that there’s significant resistance to Senators Durbin and Murray’s attack as ‘People Power’ pressures senators across the political spectrum to oppose the proposed bill along with the introduction of an alternative bill by Senator Richard Burr that doesn’t include maximum permitted levels (MPLs) for supplements.

The number of children in the UK trying to lose weight is outstripping the proportion of children that are overweight and obese. A new study published in the Archives of Disease in Childhood used data from 34,235 children aged 8-17 from the Health Survey for England from 1997 to 2016. The researchers were alarmed at the number of children considered to be of a normal weight that reported trying to lose weight and noted that the rise in weight loss attempts coincided with the introduction of the National Child Measurement Programme, which weighs children at age 4-5 years and 10-11 years. The study raises yet another red flag over the health and wellbeing of children. The latest UK data shows more than a quarter of children aged 4 to 5 years and just under half of all children aged 10 to 11 years are overweight or obese. In the US 20% of kids and adolescents aged 2-19 are now obese. At ANH-Intl we’ve been alive to the increasing risk posed by childhood obesity, which prompted us to develop and publish our Food4Kids guidelines back in 2015 for children aged 1-6 years to help parents create a healthier more vital future for their children.

The World Health Organization has issued guidelines, as part of a public consultation (open for comment from the 15th July to 14th August 2022) on the use of non-sugar sweeteners, suggesting non-nutritive sweeteners (NNSs), otherwise known as artificial sweeteners, shouldn’t be used as a tool to control weight or reduce the risk of developing chronic diseases. The new guidelines don’t go as far as suggesting NNSs are unsafe for consumption, but it does note that they’re being used to create a health halo around junk foods that are then branded as low-in or free-from-sugar, rather than encouraging people to move towards a nutrient rich, wholefood diet as recommended in our Food4Health guidelines and book, RESET EATING.

Recent media reports claim gardening can put you at risk of having a heart attack! A new study, published in PLOS One found that partaking in gardening and art activities actually improves our health and wellbeing. In particular, the researchers found that gardening and art lowers stress, anxiety and depression in healthy women. Interestingly, participants in the study were part of a group that either undertook art activities or participated in gardening related activites, which may also have contributed to the improvements in mental health and wellbeing that were seen.

Move over CRISPR, base editing is here

Base editing (a form of gene editing) is being used to combat hereditary familial hypercholesterolemia (HFH), a genetic condition that causes the body to produce high levels of cholesterol. We’re told it’s more accurate than the ‘original’ CRISPR as it doesn’t snip bits out of DNA, rather it ‘just’ corrects the parts of the DNA considered to be faulty. Human trials using base editing are now underway in a bid to correct the genetic defect that can lead to the development of HFH. However, despite the hype being given to base editing, there remain a number of potentially serious problems that are eerily similar to those seen in the use of CRISPR.

Sustainable use of wild species

The ongoing destruction of the natural resources of the planet needs to be significantly reined back. A newly published report from the Intergovernmental Science-Policy Platform on Biodiversity and Ecosystem Services (IPBES) shows how people around the world depend on 50,000 different species of wild plants and animals for their food, energy, medicine and other needs. Without good biodiversity of wild species the whole planet is in danger. The report makes a number of recommendations largely based on sustainable practices used for generations by indigenous people globally.