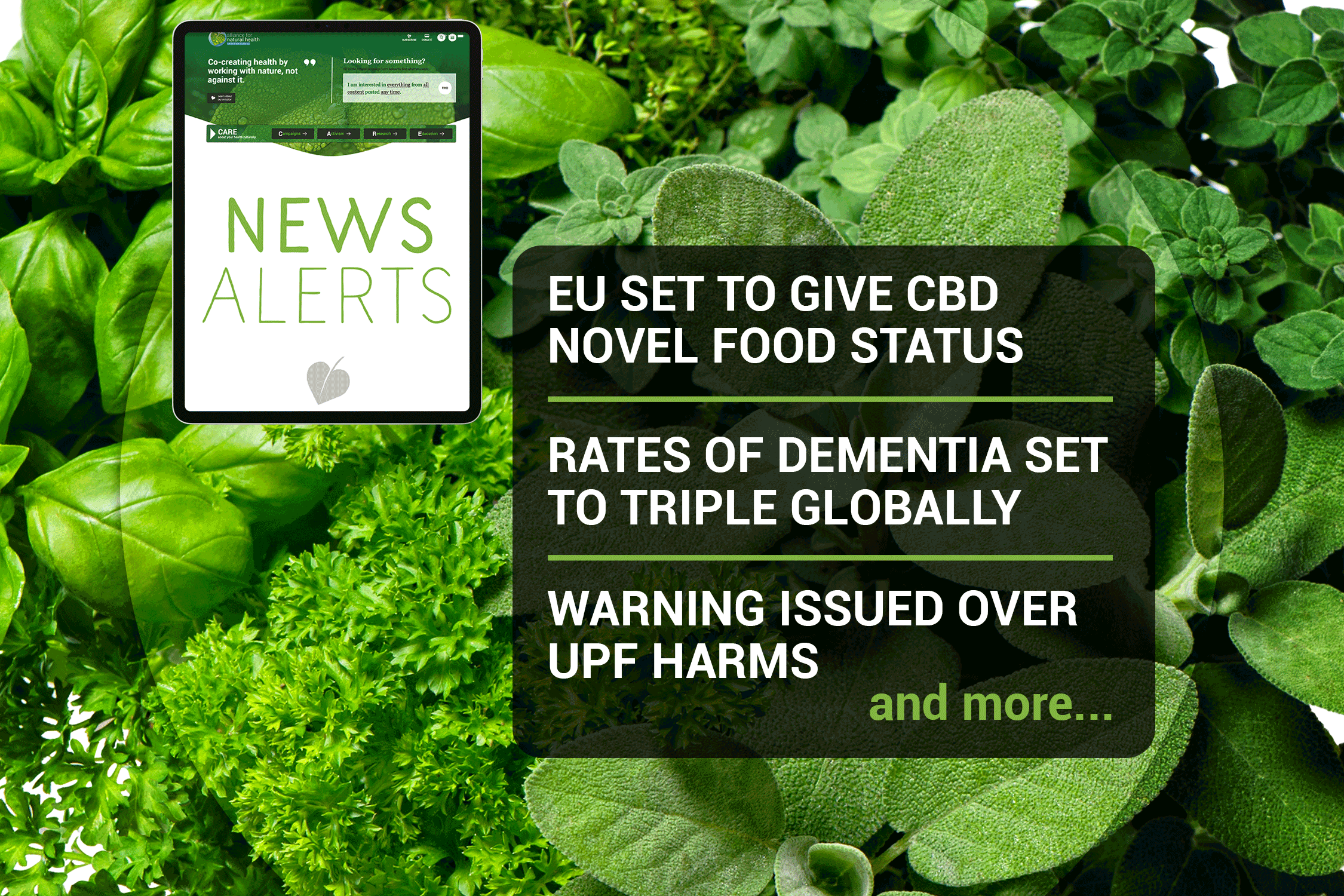 People diagnosed with cancer can often suffer from nutrient deficiencies both due to their illness and its treatment. A new study published in Cancers journal and funded by supplement manufacturer, Pharmavite, found dietary supplements provide a cost effective way for cancer survivors, who are often prone to malnutrition, to achieve an improved level of health, reduced risk of being hospitalised and improved quality of life compared to those not taking supplements

Women who eat non-nutritive sweeteners (NNSs) during pregnancy could be putting their baby at risk of becoming obese later in life. Researchers publishing in Frontiers in Nutrition fed obese pregnant rats aspartame and stevia. The offspring of rats fed NNSs were carrying additional weight and found to have altered gut microbiomes, which the researchers believe contributed to the increased weight of the pups. Previous studies in humans have shown a direct link between the consumption of NNSs and an increased risk of becoming obese. Yet governments and food manufacturers continue to focus on the reformulation of highly processed foods, to eliminate sugar by replacing it with NNSs, in order to combat the very issue it promotes.

CBD to be classified as novel food in EU

The European Food and Safety Authority (EFSA) is widely expected to make an announcement on the novel food status of cannabidiol (CBD) that will help with the submission of future novel food applications. The move comes after the European Commission suspended the review of more than 50 applications for novel food status, as it decided whether CBD should be treated as a narcotic drug. The change in approach comes following a ruling by the European Union’s top court that CBD can be traded freely among EU member states because it isn’t a narcotic. Commission Spokesman, Stefan de Keersmaecker said that CBD now qualifies as a food and that the authorisation process for CBD as a novel food can resume.

Levels of dementia across the world are predicted to triple by 2050. The predictions come in a recent study released as part of the Global Burden of Disease study published in The Lancet. The largest growth is expected to occur in Qatar and the United Arab Emirates. The main drivers of the increase, shown by this study, are being attributed to increasing levels of obesity and diabetes along with smoking. The prediction highlights the urgent need for a change in how we view and manage our health, particularly as two of the main factors cited, are both preventable and reversible through diet and lifestyle changes.

Warnings needed over dangers of UPFs

Consumers need to be warned about the dangers of ultra-processed foods (UPFs). Researchers publishing in BMJ Global Health say it’s time for governments to take action to educate individuals about the harms to health from UPFs and introduce policies designed to reduce the consumption of such ‘foods’. They recommend that tobacco style warnings on packaging along with new front of package nutrient labels should be implmented. Given we’re at the beginning of a New Year, it’s a perfect time to reset and move forward with a clean slate that allows you to focus on making the kind of changes needed to access vibrant health.

The UK government is planning to mass medicate residents in England by introducing water fluoridation to all areas, without informing the public at large. Far from being the panacea to reverse and prevent tooth decay, fluoride, in the form used for water fluoridation, is highly toxic and damaging to health. A petition has been launched to collect enough signatures to trigger a debate in parliament about a medical intervention being forced on people without their knowledge, that has the potential to seriously damage health. You can also send a ‘postcard’ to your MP — free supplies of which can be obtained by calling Sian Winstanley on +44 (0)1246 473902. This month’s issue of Caduceus magazine features an article from ANH executive coordinator, Meleni Aldridge, on the health benefits of the fourth phase of water and how it functions at a cellular level. Water is so fundamental to life and could be made toxic by the introduction of fluoride into the water supply in England. 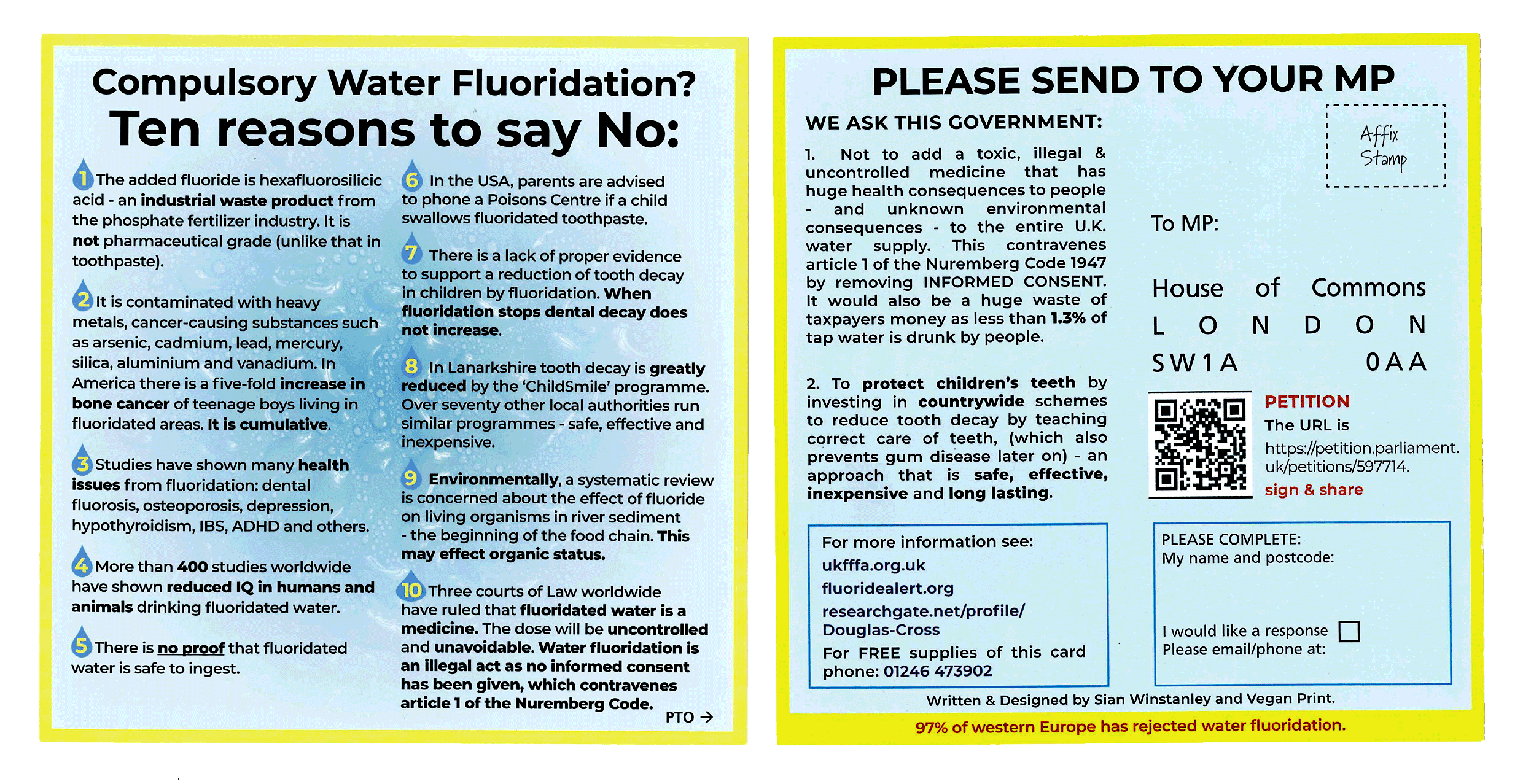