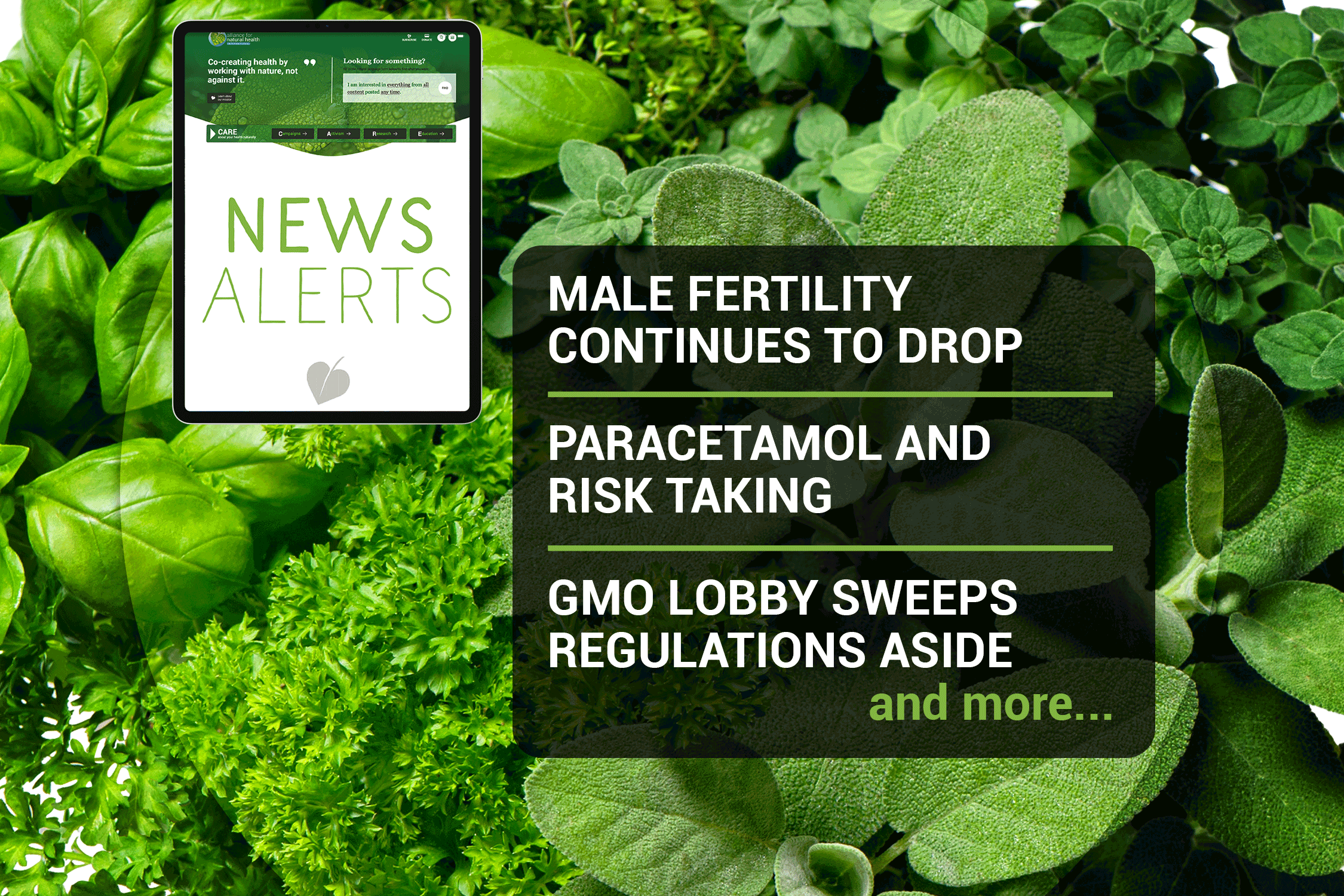 Research published in 2017 identified a significant drop in sperm counts in North America, Europe, Australia and New Zealand. At the time, the researchers didn’t have enough data to make an assessment about South America, Asia and Africa. In a newly published study in Human Reproduction Update, the same team report a decline in sperm counts in South America, Asia and Africa along with a continued downward trend globally, which is now recognised as a significant public health concern. The possible causes for such a decline are many and varied including increases in electromagnetic radiation (think men putting cell phones in their pockets), poor diet, exposure to toxic chemical cocktails, obesity and stress along with the plethora of pharmaceutical drugs being handed out to younger and younger men. Evidence of the continued drop in male fertility should act as a red flag to governments and healthcare authorities to urgently create regenerative and sustainable systems of healthcare that focus on health creation to ensure the continuation of a healthy and vibrant population.

Is Vitamin D still a valid remedy for covid-19 prevention?

A new editorial from Rachel Nicoll PhD and Michael Y. Henein, Department of Public Health and Clinical Medicine and Heart Centre, Umea University, published in the Journal of Clinical Medicine, rebuts the findings of Joliffe et al’s recent randomised controlled trial of vitamin D to prevent acute respiratory infection and covid-19. Joliffe et al’s findings, which have been widely publicised, concluded that: “Among people aged 16 years and older with suboptimal vitamin D status, implementation of a population level test-and-treat approach to vitamin D supplementation was not associated with a reduction in risk of all cause acute respiratory tract infection or COVID-19“. Nicoll and Henein’s analysis of Joliffe et al’s paper lists a number of ways in which this may have been a trial designed to fail. In conclusion, they consider that adequate vitamin D is an essential protection against acute respiratory infection and covid-19. Please keep taking your vitamin D, at a dose of at least 4000 IU/day if you’re heading into the northern winter.

The NHS is once again attempting to digitise patient data and hand it to the highest bidder. Without patient consent! The so-called ‘Federated Data Platform’ has been delayed twice due to controversy over the lack of competition for the contract and conflicts of interest. The £360 million contract is hotly tipped to be handed to US giant, Palantir, which has consulted on the project. The amount of health data we already give away freely everyday through multiple health-based apps and devices is a literal goldmine for corporations wishing to exploit the burgeoning health market. So much for privacy and data-protection.

How often do you just ‘take a paracetamol’ (tylenol) to deal with a headache, general pain or fever? It’s become embedded in our medicine cabinet whatever your age. Take acetaminophen (paracetamol) regularly and you could be more likely to take risks you wouldn’t otherwise consider, according to a study published in Social Cognitive and Affective Neuroscience in 2020. Participants were asked to play a computer game in which they pumped up a balloon earning money with each pump. The group that took acetaminophen were more likely to keep pumping and burst the balloon than those who didn’t take the drug. Although the study found the effects are small, there’s growing concern that when combined with previous studies linking acetaminophen use to a reduction in empathy, blunting of cognitive function as well as dulling the pain of relationship breakdowns, the effect of the drug could be significant. More recently taking paracetamol during pregnancy has been linked to the development of ADHD in children at 3 years old. Just another reminder that a drug is a drug, even if it’s considered to be very ‘safe’, it can impact our mental health and that of our children to such an extent, it may be time to reconsider the contents of your medicine cabinet and return to good old aspirin.

The campaign to demonise red meat consumption has received yet another blow. Researchers from the University of Washington’s Institute for Health Metrics and Evaluation (IHME) publishing in Nature Medicine found there are minimal health risks associated with eating unprocessed red meat. The team, which slammed years of shoddy research on red meat consumption, developed a new risk analysis system to evaluate decades worth of data to reach their conclusion. For those who choose to eat red meat we recommend you prioritise organic, grass-fed over grain-fed, avoid processed meats and include a diverse range of plant foods as per our Food4Health Guidelines for optimal health.

>>> Want to know more about resetting your diet and health? Buy your copy of RESET EATING today

Governments around the world are caving to pressure from Big Biotech to approve gene editing techniques dubbed ‘less risky’ than ‘traditional’ genetically modified organisms. Gene editing is now being repackaged as ‘new genomic techniques’ and ‘precision breeding’ in a bid to disguise the fact that it’s still producing genetically modified organisms. In Kenya, the new government has bowed to pressure and lifted its 10 year ban on GM foods despite fierce opposition. The EU looks set to deregulate ‘new genomic techniques’ even though there’s a significant lack of safety data. The huge increase in lobbying in the UK by Big Biotech following Brexit is close to achieving its goal of deregulation of gene edited organisms as the Genetic Technology (Precision Breeding) Bill makes its way virtually unhindered through the Parliamentary process. The goal of the bill is to remove labelling and traceability requirements for organisms created through gene editing. As the Bill stands, these organisms will effectively end up being hidden in our food system. The Regulatory Policy Committee has deemed the Bill ‘not fit for purpose’, yet the legislation continues to be steamrollered through without due consideration to the many red flags already raised around the use of these technologies. Roger Kerr, CEO of Organic Farmers & Growers concludes the situation perfectly in his recent open letter saying, “It also fails to safeguard our basic right as citizens to make an informed choice about what we consume”. A new survey commissioned by Beyond GM has found that 75% of those polled support robust regulation, labelling and traceability of all GMOs.

Having a purpose in life helps you live longer

Do you have a strong ikigai (purpose in life)? Those who have a strong reason for getting out of bed every morning are more likely to live longer than those who don’t according to a new study published in Preventative Medicine. Having a purpose in life has also been linked to better health in general. Overall the study found those with the highest sense of purpose had the lowest risk of mortality. Researchers who’ve spent years evaluating the five longest lived, healthy, so-called ‘Blue zone’ communities have revealed that of the nine factors that are widely associated with very long healthspan, purpose in life may possibly be the most important of all.