Could your drinking water be contaminated with spike protein? 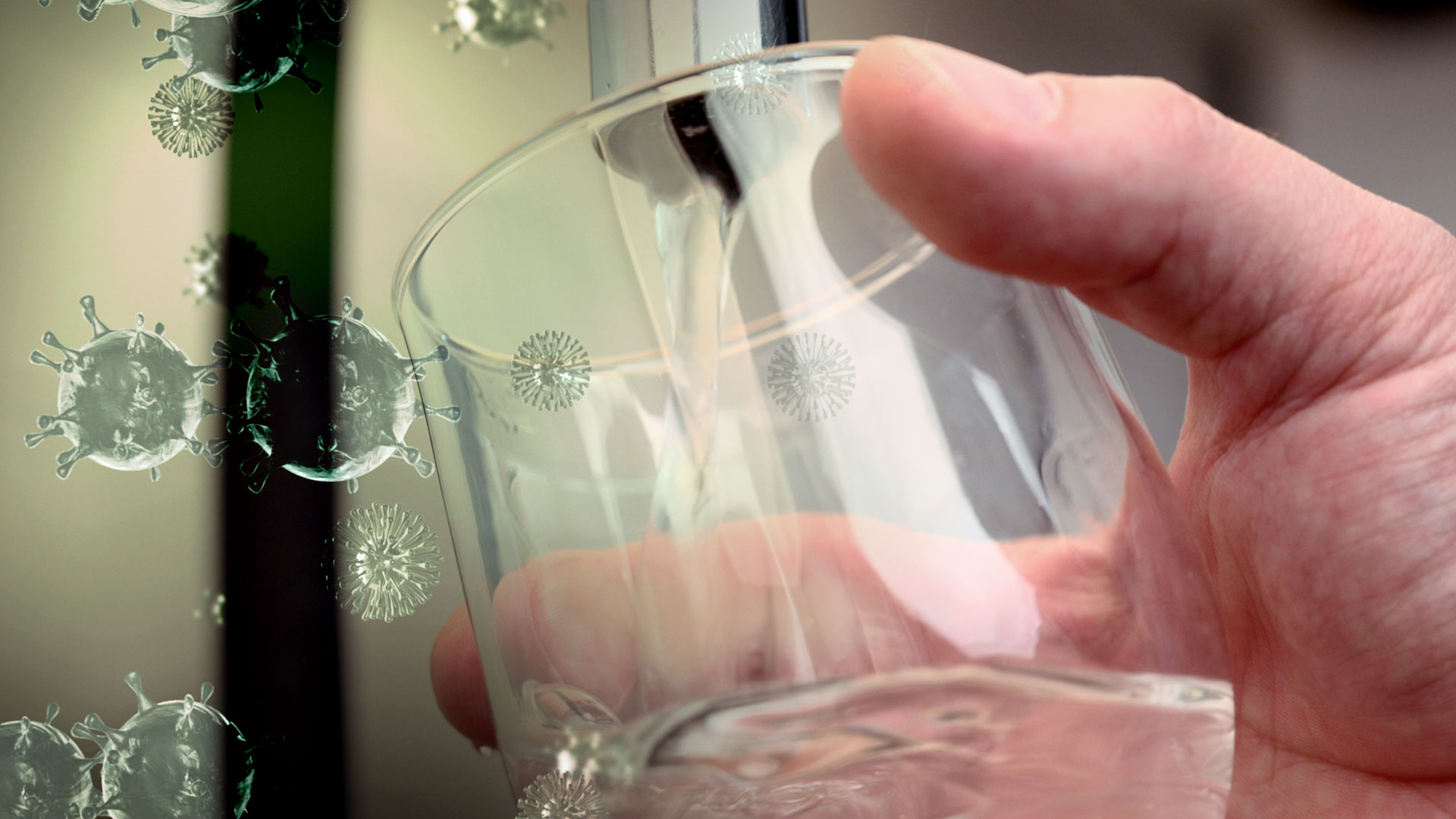 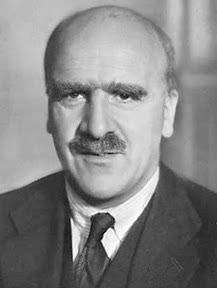 “I suppose the process of acceptance will pass through the usual four stages: 1. This is worthless nonsense, 2. This is an interesting, but perverse, point of view, 3. This is true, but quite unimportant, 4. I always said so.”– J. B. S. Haldane, British geneticist and evolutionary biologist (1992-1964)

It’s been well over 2 years since SARS-CoV-2 was first identified in people in Wuhan, China in late-December 2019. But increasing evidence suggests the virus was circulating at least 2 months before this date.

But you can go back further in history if you look. That’s exactly what Albert Bosch’s team from the University of Barcelona did after they found samples of sewerage wastewater in Barcelona that tested positive in December 2019. They went on to analyse frozen historic samples and found samples that tested positive from as early as March 2019, over 3 years ago. Bosch’s study was reported by Reuters so it can hardly be dismissed as conspiracy theory.

Now, take in the fact that many countries around the world have experienced four waves of SARS-CoV-2 over the last 2 or 3 years. That’s a lot of virus that’s replicated in a lot of people – and a large proportion of this genetic material ends up in sewerage and wastewater given viral particles are readily shed in faeces, urine and saliva. 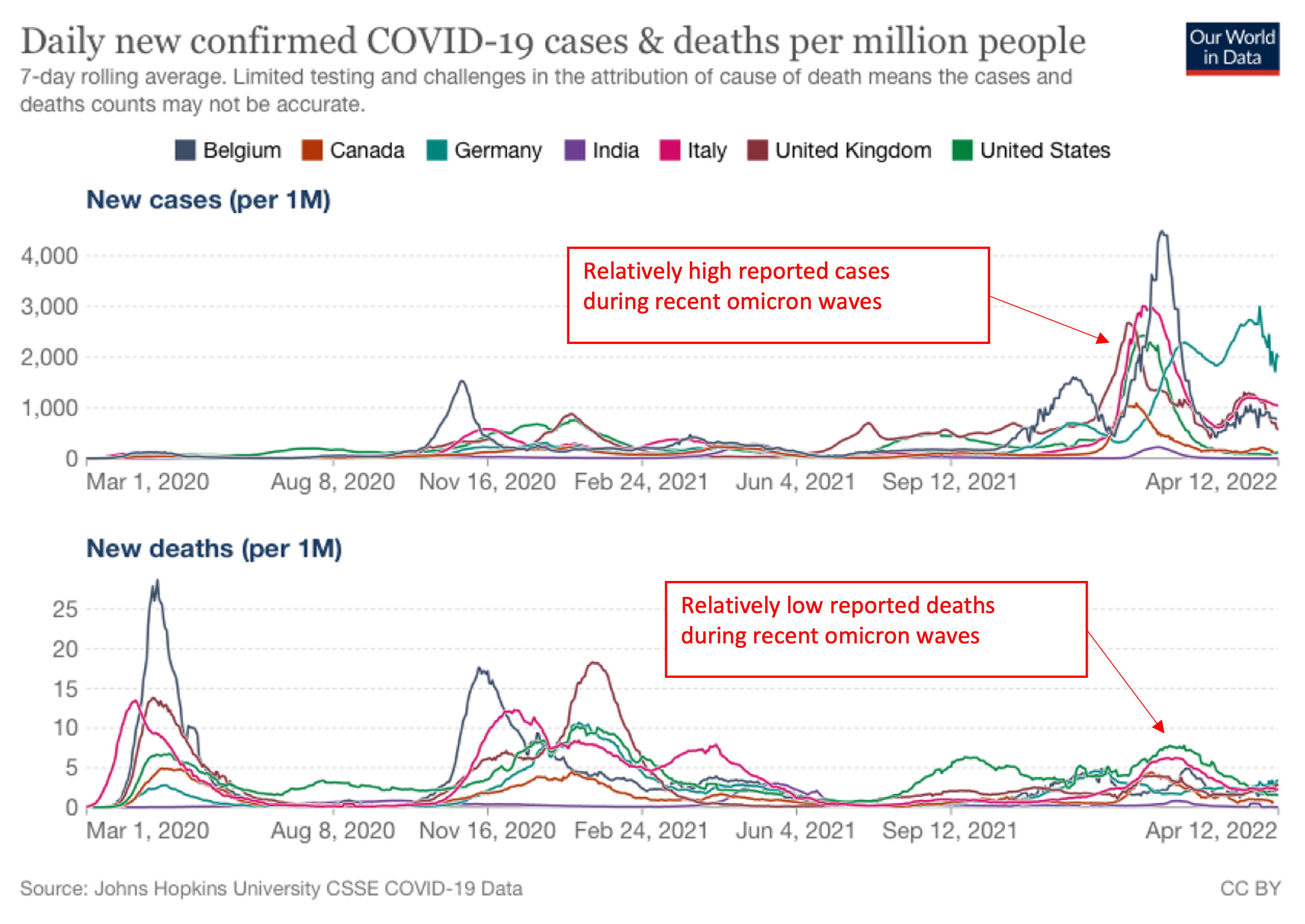 Figure 1. Comparison of new cases and deaths (per million population) in selected countries over the pandemic timeline. Source: Our World in Data (13 April 2022)

That’s not all. Some 65% of the world’s population has had at least one genetic vaccine that produces spike protein in the body. That’s not viable virus, but it’s spike protein, that is likely the main component of the virus responsible for disease in humans. That’s if you’re prepared to believe a major study by one of the foremost research institutes in the field, the Salk Institute, at least. And not believe the so-called ‘fact checker’ (aka narrative checker) journalists (e.g. here and here).

The field of wastewater-based epidemiology is now a burgeoning field. Now that genetic sequencing methods like PCR have been rolled out everywhere, you can test sewerage and other wastewater to get an early indication if an outbreak is about to happen.

You might argue you’d see a coming outbreak quicker if you tested people rather than sewer water – but the reality is only a small proportion of people are testing regularly, especially if they feel healthy. So lifting manholes, collecting and analysing waste water samples has been something that’s being done for ongoing surveillance, including on university campuses.

In September 2020, the US Centers of Disease Control and Prevention (CDC) launched its National Wastewater Surveillance System to help provide an early warning of SARS-CoV-2 spread in communities. It’s a plausible way of doing surveillance given it’s selection agnostic and it might give you a few days warning if infection levels in the community are increasing. But what are you to do with the information? Lockdown those who’re most susceptible, give them preventative therapeutics or jabs, or just elevate their level of fear?


Speaking of therapeutics, the emphasis on remdesivir by health agencies around the world shows you just how far off track we’ve (sorry, they’ve) got. This is an antiviral developed by Gilead Sciences initially for hepatitis C, that failed, that then had an outing for Ebola, that failed, that was then wheeled out for covid-19. Judging by its inclusion as a key therapeutic agent on the approved drug lists of most health agencies, you’d think the trials had been successful. Far from it. The one published in the New England Journal of Medicine that resulted in its approval in the US, UK and EU didn’t even find a statistically significant effect. The latest large-scale European DisCoVeRy trial found: “Remdesivir use for the treatment of hospitalised patients with COVID-19 was not associated with clinical improvement at day 15.”

I’m not saying the NIH and Gilead have engineered remdesivir’s position as an authorised drug for treatment of covid-19. But I am implying it. What’s even more outrageous is that the FDA has approved its use under emergency use authorisation for babies of 3.5kg body weight or more. Here’s Gilead’s boast about it. The decision is a scientific and regulatory travesty given the lack of data and lack of understanding of long-term consequences. Made even more blinding by either the absence of any recommendation for vitamins D, C or zinc, all with much better evidence. Or, as the UK has done with its NICE guideline, suggested that 10 micrograms (400 IU) a day of vitamin D is the only nutrient that is helpful against covid-19. That’s blatantly rubbish and this trivial amount of vitamin D based on bone health not infection data is desperately low and not in any way science-based.

Losing sight of the real problems and solutions

Frankly, given the present low risk of severe disease posed by the virus (Figure 1), it’s our view that we should only be responding to symptoms of this or any other respiratory or other infectious disease in at-risk populations. Health care systems need to get back to doing proper healthcare, in all its guises, not chasing after one pathogen that appears ever more likely to be a product of gain-of-function research (see here and here).

If disease is asymptomatic or mild, it means that the virulence in a given population is either low (and should be, relatively speaking, of low concern) or that group’s immune system is doing a great job stopping the consequences of infection becoming more serious. That’s a good enough reason to try to stay as healthy as possible – to highlight one of the most spectacular misses of recent public health policy in the vast majority of countries over these last two years.

Back into the sewers

Let’s get back to the place a large element of shed virus and spike protein ends up: the sewers.

>>> Read review on SARS-CoV-2 in wastewater

Try digging out some reliable data on spike protein in drinking water and you’ll struggle. I did at least, even with four decades as a researcher under my belt. Does that mean no one’s interested, the data’s hidden from public sight, it’s so obviously not going to be a problem there’s no point researching it, or ‘they’ just don’t want you to know.

One review suggests given that some water treatments reduce or remove some pathogens, the risk of infection by SARS-CoV-2 in drinking water is low “if proper precautions are taken” during water treatment.

That view is based on there not being a significant transmission risk from whole, viable virus particles. It doesn’t tell you anything about spike protein that’s about one-tenth the length of the typical diameter of a SARS-CoV-2 particle, which, you’ll remember (if we ignore the Salk Institute findings) isn’t meant to harm us.

Those of us who don’t buy that have an obvious basis of concern. A person unknown to us by the name of Emma Harrington had a similar concern and submitted, on 7 June 2021, a freedom of information request to Thames Water, that claims to be the UK’s largest water and waste water company.

The good news? The freedom of information request to Thames Water was successful. The bad news: Thames Water responded as follows: “Currently we have no monitoring programme.”


I find myself with one very clear recommendation if you have a concern, as I do. Consider, if you haven’t already, installing a high quality reverse osmosis (RO) system (see Figure 3) in your home and harvest your drinking and cooking water from that dedicated faucet.

Simply speaking an RO membrane is a semi-permeable membrane through which water is driven owing to pressure and a concentration gradient between the sediments and contaminants one side and pure water on the other. The membrane has tiny pores that are so small many mineral salts and contaminant molecules simply can’t travel through them to any significant extent, whereas as water molecules can.

This is one issue in which size does matter: the size of the pores in relation to your contaminant.

Here, let me delight in quoting the CDC, which states that RO has “a very high effectiveness in removing viruses”, bacteria, protozoa and “common chemical contaminants”.

What about the size of the SARS-CoV-2 viral particle, the spike protein, and the membrane pore size. Here are the summary stats: 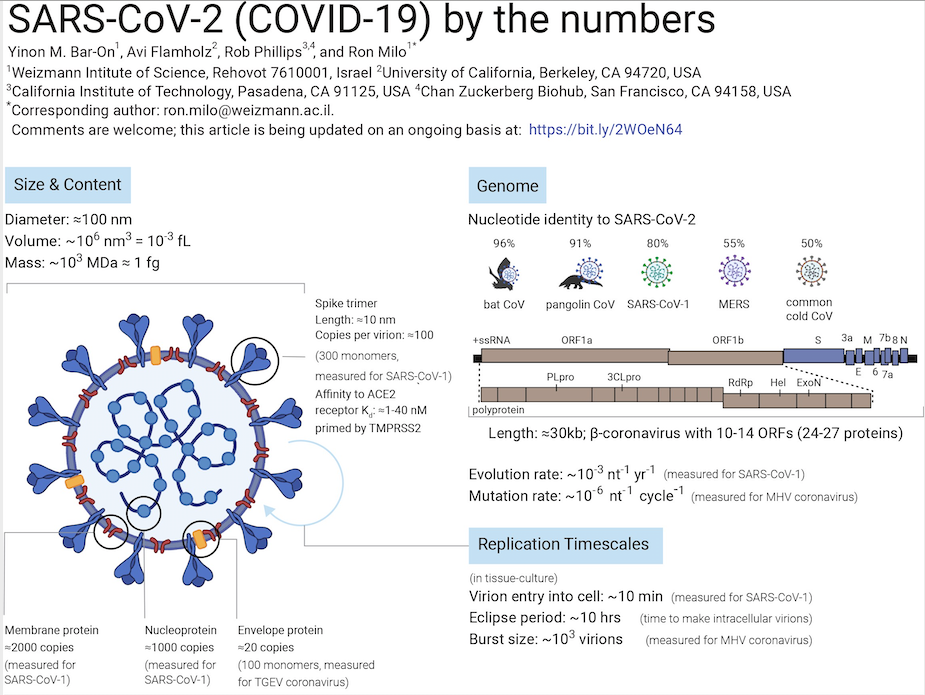 In practical terms, we strongly suggest, if you haven’t already, you invest – if you can – in an under-sink RO system (e.g. Fig. 3), that also re-alkalises the water with health-giving mineral salts. Some commercially available systems also utilise various energetic systems (e.g. vortices, magnets) that help to re-structure the water, improving its utilisation in the body and its resultant health benefits.

All systems do require annual maintenance and sanitation to avoid any build up of bacteria, and typically in a domestic setting, the RO membrane will last around 3 years before needing replacement. 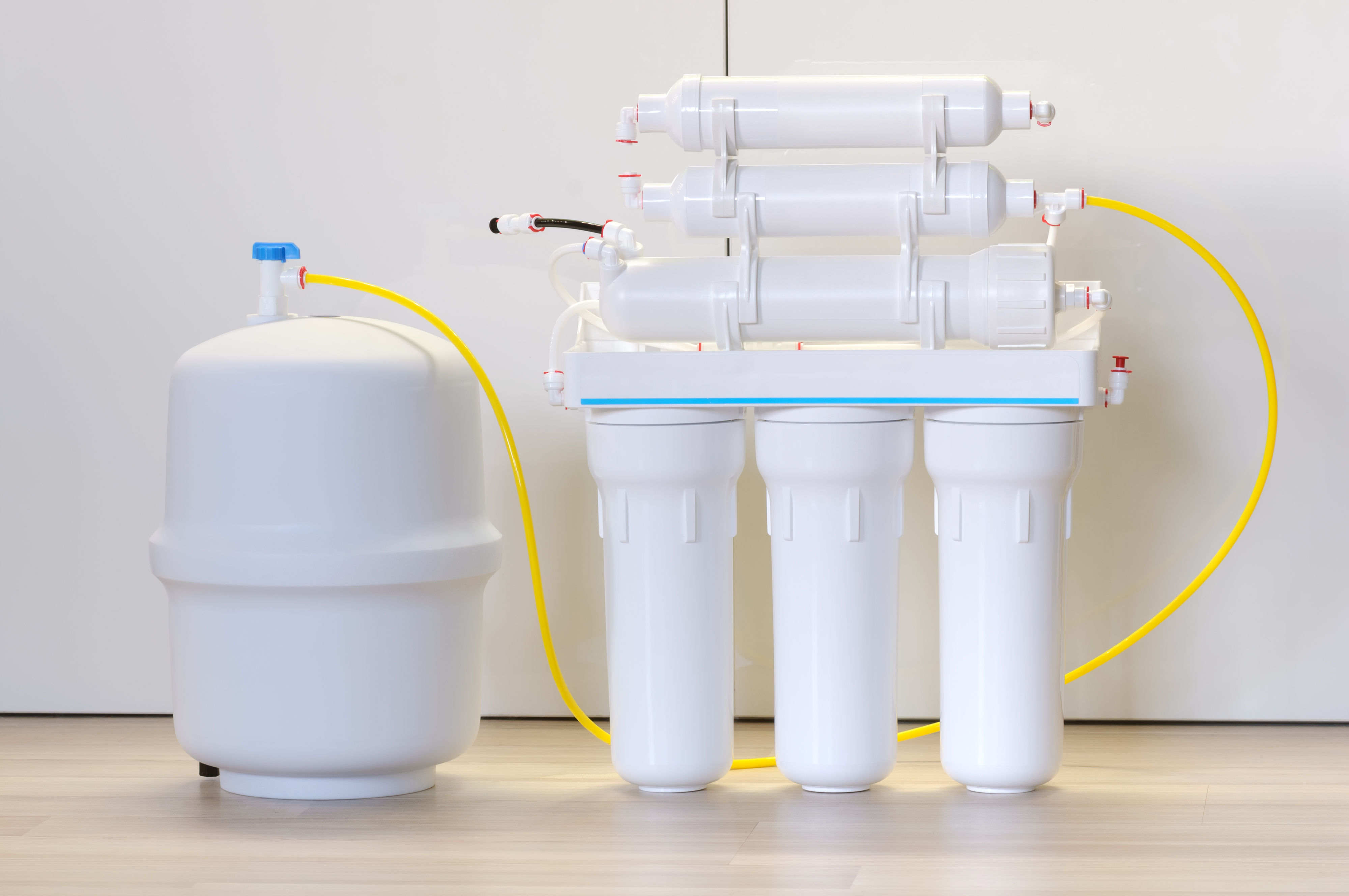 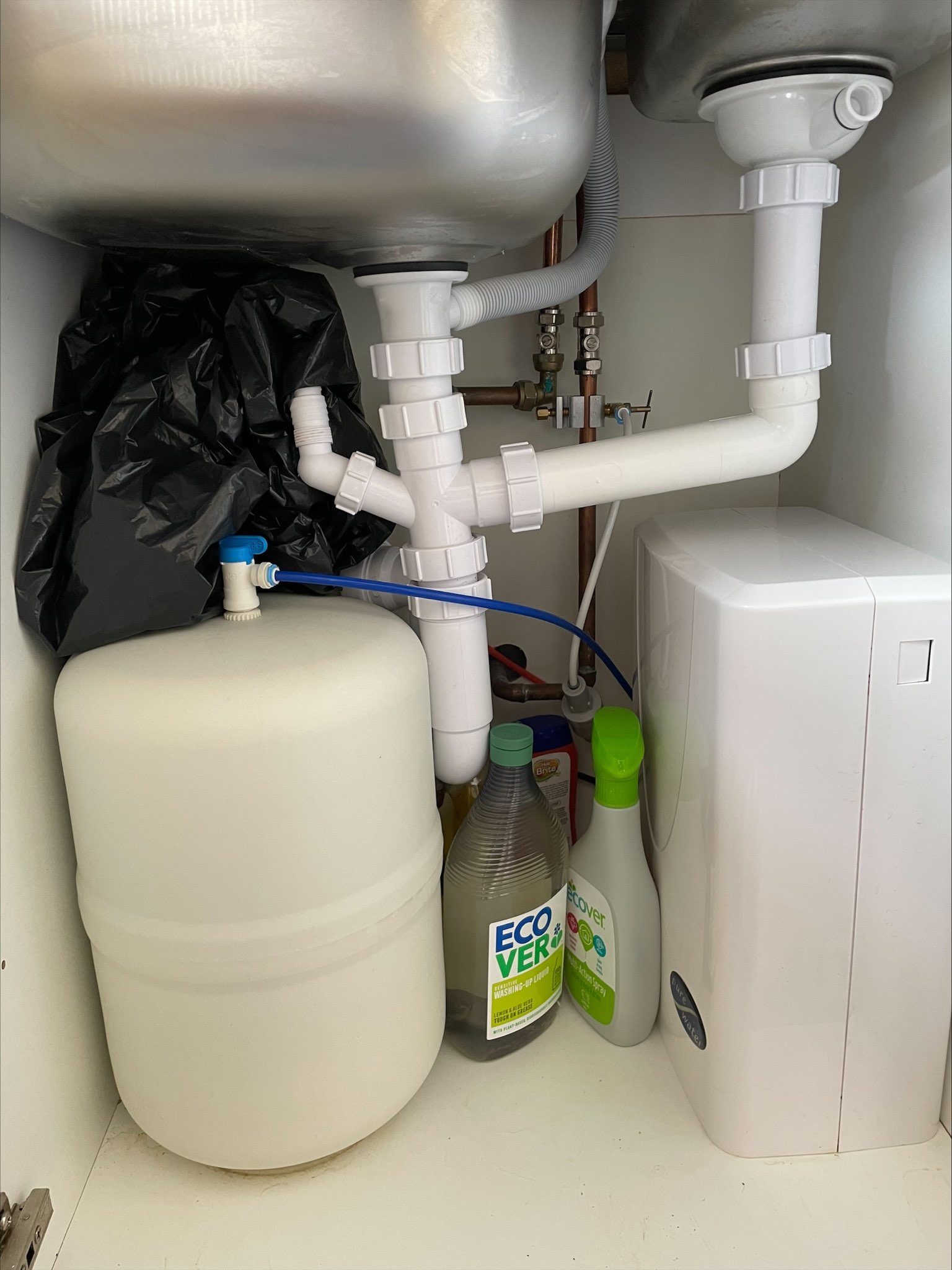 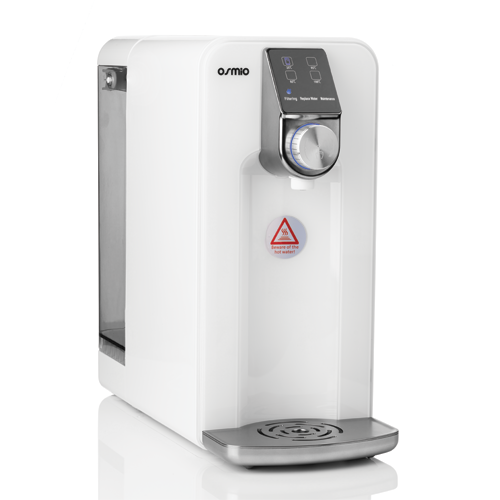 I kicked this piece off with a quote from JBS Haldane. It’s worth remembering that in his heyday in the mid-20th century, science was often seen as being entirely independent of politics. There was such a thing as ‘blue sky research’. Science back then had yet to be fully corrupted by political and economic powers. Yet Haldane’s extraordinary astuteness enabled him to forecast what has since become a dominant problem of our day. He asserted, “I began to realise that even if the professors leave politics alone, politics won’t leave the professors alone.”

Politics, inseparable from economics, is why the majority of scientists will continue to tell you remdesivir is the answer to your covid-19 infection and your drinking water supplies are safe without nanofiltration. Don’t think for a minute that’s got anything to do with science.

And if your survival instinct kicks in and your sense of reason tells you the mainstream rationale must be wrong, my sense is you stand a much better chance than most in this inverted, confusing and rapidly changing world.

Please share this article widely with those you care about. Thank you.

>>> For more curated covid coverage from the past 2 years visit Covidzone.org